Ian Rapoport of NFL Media reports that the Jaguars have claimed RB Darrell Henderson off of waivers from the Rams on Wednesday. 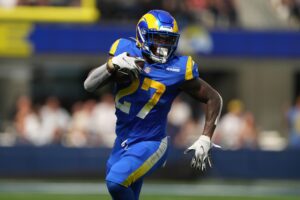 Since Henderson is still on his rookie contract and owed only about $436,718 for the remainder of the 2022 season.

The Jaguars could use some depth at running back after trading away James Robinson before the deadline. Henderson figures to be a good compliment to Travis Etienne.

Henderson, 25, was a third-round pick by the Rams in the 2019 NFL Draft out of Memphis after Los Angeles traded up with the Buccaneers to acquire him. He signed a four-year, $4.21 million rookie contract.

The Rams surprisingly opted to waive Henderson on Tuesday.

In 2022, Henderson has appeared in 10 games for the Rams and rushed for 283 yards on 70 carries (4 YPC) to go along with 17 receptions for 102 yards receiving and three total touchdowns.