Ian Rapoport reports that the Jaguars are expected to decline their team option on TE Tyler Eifert, which will make him a free agent. 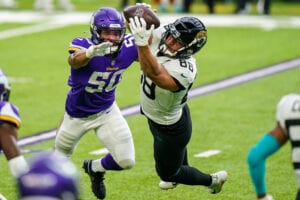 The Jaguars figure to be in the market for tight end help, considering that TE James O’Shaughnessy will be an unrestricted free agent this offseason.

Eifert, 30, is a first-round pick of the Bengals back in 2013. He played out the final year of his four-year, $8.256 million contract and finished the 2017 season under the fifth-year option.

The Bengals brought Eifert back on back-to-back one-year contracts before he signed with the Jaguars for two years at $15.5 million last year.

In 2020, Eifert appeared in 15 games for the Jaguars and caught 36 passes for 349 yards receiving and two touchdowns.