The Jacksonville Jaguars officially re-signed RB Dare Ogunbowale to a one-year exclusive rights contract for the 2021 season on Monday. 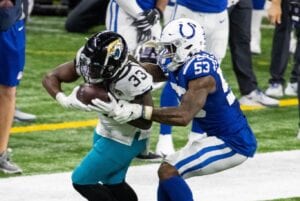 Ogunbowale, 26, wound up signing a three-year, $1.66 million contract with the Texans as an undrafted free agent out of Wisconsin back in May of 2017. The Texans cut him loose coming out of the preseason and later signed him to their practice squad.

After being released by Houston, Ogunbowale had brief stints with the Buccaneers and  Washington before returning to Tampa Bay in 2018. He was re-signed to a futures deal for 2019 and eventually caught on with the Jaguars at the start of last season.