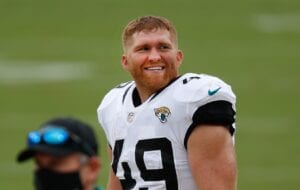 Miller, 33, is a former seventh-round pick of the 49ers back in 2011. He was in the third year of his four-year, $6.831 million contract when the 49ers released him after he was charged with seven felonies for assaulting a 70-year old man and his son back in 2016.

The Jaguars signed Miller to a contract this past August.

In 2020, Miller has appeared in seven games for the Jaguars and caught one pass for one yard receiving.

187,501FansLike
7,623FollowersFollow
275,654FollowersFollow
© NFLTradeRumors.co is an independent news source and has no affiliation with the National Football League (NFL), NFL.com, or any team(s).
wpDiscuz