According to Mike Mitchell, the Jets are re-signing QB Josh Johnson to the practice squad. 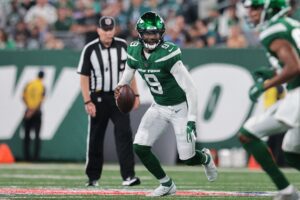 Johnson sticks around as a veteran backup in New York, albeit not on the active roster.

The 49ers signed Johnson to their practice squad last year before returning to San Francisco this past January on a futures contract. He was cut in June, however.

In 2018, Johnson appeared in four games for Washington and completed 57.1 percent of his passes for 590 yards, three touchdowns and four interceptions. He also rushed for 120 yards and a touchdown.