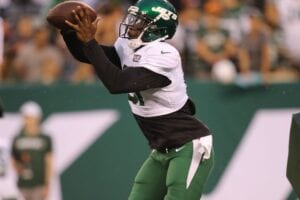 Enunwa said a few months ago that he is still hoping to resume his career, despite a career-threatening neck injury.

“If I’m capable of playing, then that’s what I’ll do,” Enunwa said. “If it comes down to the fact that the doctors say I can’t, there’s not much I can do. There’s really nothing I can do there, but if I have the ability to (play), the passion will always be there, the want-to will always be there.

“I think, aside from obviously my neck, the physical ability will always be there. It’s really just about me going for the ride, I guess, because I’m not in control of that part anymore.”

The Jets re-signed Enunwa to a four-year, $36 million deal which included $20 million guaranteed last year. He’s been paid $6 million this offseason and is owed $4.1 million in injury guaranteed for the 2021 season.

In 2019, Enunwa appeared in one game for the Jets and caught one pass for -4 yards receiving.