In a press conference on Wednesday, Jets GM Joe Douglas said he will listen if teams call to discuss a trade for QB Sam Darnold.

“I will answer the call, if it’s made,” he said via Ralph Vacchiano. “Sam is, we think, a dynamic playmaker in this league with dynamic talent … But if calls are made, I will answer them.”

Douglas reiterated they still have a lot of confidence in Darnold’s talent.

“Our stance on Sam [Darnold] hasn’t changed. He’s an extremely talented player,” Douglas said via Andrew Siciliano. “…We’re in the process of gaining as much information as we can leading up to free agency and the draft but our stance on Sam has not changed.”

Douglas told reporters there is “no hard timeline” on when they have to make a decision on Darnold’s future, per Rich Cimini.

Reports have indicated the Jets plan to do a thorough evaluation of the 2021 draft class given they have the No. 2 overall pick.

That potentially pushes any decision on a Darnold trade until the end of March when pro days for the top quarterbacks will conclude. That’s assuming the Jets do indeed decide to move on with one of the prospects in this class.

With trades completed for Matthew Stafford and Carson Wentz, Darnold becomes the next-highest profile QB reportedly available this offseason, at least until when/if the Texans relent on their stance with QB Deshaun Watson.

The contract will also include a fifth-year option for the Jets to pick up in 2021.

In 2020, Darnold has appeared in 10 games for the Jets and completed 59.7 percent of his passes for 1,767 yards, six touchdowns and nine interceptions. He has also rushed for 194 yards and two touchdowns.

We’ll have more on Darnold and the Jets as the news is available. 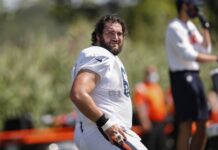