On Wednesday, Jets LB C.J. Mosley told reporters that he’s been cleared for football activities and expects to be ready for the start of training camp, per Ralph Vacchiano. 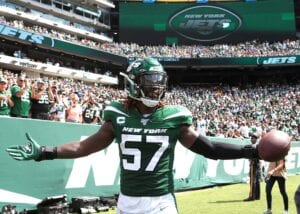 Mosley dealt with groin and abdomen injuries last year that limited him to appearing in just two games for the Jets and eventually being placed on injured reserve.

Mosley, 27, is a former first-round pick of the Ravens back in 2014. He played out the final year of his four-year, $8,788,002 rookie contract before the Ravens picked up his fifth-year option last year.

Mosley made a base salary of $8,718,000 for the 2018 season before signing a record five-year, $85 million contract with the Jets that includes $51M guaranteed during the offseason.

The Jets owe Mosley base salaries of $6 million and $16 million over the next two years of the agreement.

In 2019, Mosley appeared in two games for the Jets and recorded nine tackles, one interception returned for a touchdown, a fumble recovery and two pass defenses.