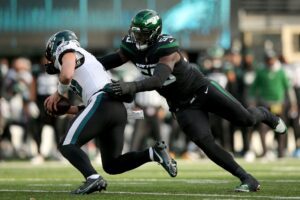 The Texans later traded Lawson to the Jets at the start of the regular season for a sixth-round pick in 2022.

In 2021, Lawson has appeared in 14 games for the Jets and recorded 23 tackles one sack, an interception, a fumble recovery and two pass deflections.