According to Howard Balzer, the San Francisco 49ers brought in three fullbacks for tryouts on Thursday including Malcolm Johnson, Freddie Stevenson, and Marquez Williams.

In 2016, Johnson appeared in seven games for the Seahawks and recorded five receptions for 44 yards and lost one fumble. He also contributed one rushing attempt for two yards.

The Jaguars waived Williams with an injury designation coming out of the preseason and he later reverted to their injured reserve list before being cut loose a few months ago.

During his one year at Miami, Williams totaled 19 receiving yards on two receptions and scored a touchdown to go along with one rushing attempt for one yard over the course of three games. 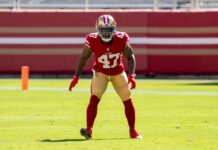