According to Ian Rapoport, the Raiders and TE Darren Waller are continuing to discuss a new deal. 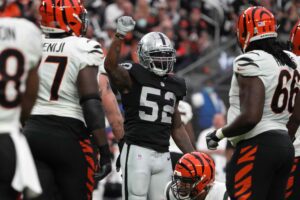 He says it remains to be seen what kind of deal the two sides can work out and what the timeline looks like, but points out Waller has made it a point to handle things without creating friction, showing up to training camp on time with his teammates and letting his agents focus on negotiations. He also participated in voluntary workouts this spring.

“My agent is working on that,” Waller said on the Ross Tucker Podcast. “I understand it, but I know if I focus on it too much, it could take away from my job and learning a new system and just continuing to try to elevate and take care of my body in the right way. I try to focus on those things and let my agent handle that. When decisions need to be made, decisions need to be made.”

Waller has two years remaining on his deal and is dramatically underpaid compared to the production Las Vegas has gotten from him the past few years.

Rapoport adds Raiders LB Denzel Perryman is also a candidate for a new deal after arriving via trade last season and becoming a key defensive starter. He’s entering the final year of a two-year, $6 million deal.

However, the Raiders have handed out a ton of money this offseason, both to free agents and extensions for players like QB Derek Carr and WR Hunter Renfrow.

Waller, 29, is a former sixth-round pick of the Ravens. He was in the third year of his four-year, $2.39 million rookie contract when Baltimore waived him coming out of the preseason and later signed him to their practice squad.

The Raiders signed him off the Ravens’ practice squad in 2018 and later locked him up to a three-year extension worth around $9 million per year.

He’s set to make base salaries of $6.25 million in each of the final two years of his deal.

In 2021, Waller appeared in 11 games for the Raiders and caught 55 passes for 665 yards receiving and two touchdowns.

Perryman later agreed to a restructured contract that paid him up to $6,487,500 for the 2020 season. Last offseason, Perryman signed a two-year, $6 million deal with the Panthers but was traded to the Raiders in exchange for a 2022 sixth-round pick.

He’s entering the final year of his contract and set to make a base salary of $1,120,000 next season.