Mark Maske of Washington Post reports that the NFL’s investigation into the Patriots videotaping the Bengals’ sideline is winding down and could be over as soon as this week.

Sources familiar with the matter tell Maske that the NFL has found no evidence up to this point linking Patriots HC Bill Belichick or others from the team’s football staff to the video shot by the team’s crew last month.

According to Maske, the expectation right now is that the NFL will impose penalties consistent with those handed out in recent years in other cases of game-day infractions, barring any new evidence surfacing.

Maske suggests New England could be looking at a “fine in the hundreds of thousands of dollars and possibly the loss or reduction in value of a draft pick.”

NFL commissioner Roger Goodell and others in the league will still need to review the findings before making any official announcement on the matter. However, Maske says there is still no indication that Belichick or the Patriots’ football staff had anything to do with the video.

The Patriots claim an independent crew filming an episode of a documentary for the team’s media were unaware of the NFL’s sideline video policy.

Jay Glazer of FOX Sports obtained and aired footage of the incident between Bengals’ security and the Patriots’ employee.

Belichick has maintained in multiple media availabilities that the football side “100 percent have zero involvement in this.”

The Patriots notified the Browns, Cincinnati’s opponent that week, that they would have a crew in the press box, but did not alert the league or the Bengals. Concerned Bengals employees flagged NFL security after seeing the crew videotaping the sideline for the entire first quarter and the tape was confiscated.

We’ll have more regarding the Patriots videotaping situation as the news is available. 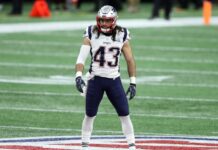