The trade market for 49ers QB Jimmy Garoppolo has been at a standstill since the veteran underwent surgery on his throwing shoulder in March. He’s scheduled to resume throwing in the next couple of weeks, which could rekindle his trade market. 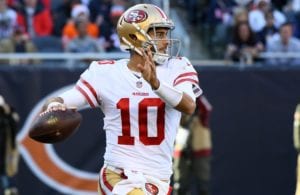 However, in an appearance on the Pat McAfee Show, NFL Media’s Ian Rapoport says the only team that seems to be in the market to trade for a quarterback right now is the Carolina Panthers.

Rapoport adds that while Garoppolo is set to begin throwing again, he still likely will need some ramp-up time and that will impact his market. Sports Illustrated’s Albert Breer noted Garoppolo’s injury has been a tricky one in the past for quarterbacks and he’ll have to prove to teams he’s ready for the season.

Breer also reported Monday that San Francisco has been willing for some time to let Garoppolo negotiate directly with other teams to lower his scheduled cap number for 2022. He’s due $25 million in total compensation and only Carolina and Cleveland currently have enough cap space to take that on without clearing any space.

That figure becomes fully guaranteed if Garoppolo is on the roster in Week 1 for the 49ers, so if they can’t work something out by then, Breer writes it stands to reason they would cut Garoppolo to save that money for extensions for WR Deebo Samuel and DE Nick Bosa.

49ers HC Kyle Shanahan said recently he still expects Garoppolo to be traded at some point, though he stopped short of guaranteeing it.