According to Pro Football Talk, the NFL is reviewing the fight in the Buccaneers’ 20-10 win over the Saints for potential suspensions to the main participants: Bucs WR Mike Evans & Saints CB Marshon Lattimore. 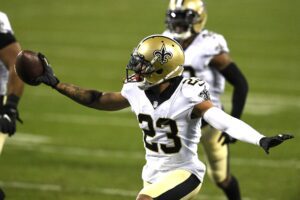 Both Evans and Lattimore were ejected after fighting early in the fourth quarter. Lattimore started exchanging words with and shoving some other Bucs players, then Evans charged off of the sidelines and knocked over Lattimore, sparking a bigger brawl.

The two players have a history together and have gotten tangled up before, which PFT says will factor into the league’s decision here.

The league is also looking at the involvement of retired Buccaneers HC Bruce Arians, who remains with the team as a consultant and was on the sideline Sunday, per PFT.

Here’s a video of the event and aftermath:

Mike Evans and Marshon Lattimore were both ejected after this scuffle 😳pic.twitter.com/kNrU3QDTgS

Lattimore, 25, is a former first-round pick of the Saints back in 2017 out of Ohio State. He was entering the final year of his four-year, $15.35 million contract and set to make a base salary of $1.53 million for the 2020 season when the Saints exercised his fifth-year option.

In 2022, Lattimore has appeared in two games for the Saints and recorded five total tackles and one pass deflection.

We’ll have more on Evans and Lattimore as the news is available.