According to Tom Pelissero, Lions RB D’Andre Swift sprained his shoulder in Week 3 against the Vikings. 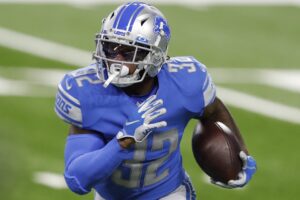 The injury doesn’t need surgery but Pelissero adds it could result in some missed time for Swift.

Should the Lions place Swift on injured reserve, it would knock him out for a minimum of four weeks.

Swift, 23, was a two-year starter at Georgia and earned first-team All-SEC honors in 2019. The Lions selected him with No. 35 overall pick in the 2020 NFL Draft.

In 2022, Swift has appeared in three games for the Lions and rushed 27 times for 231 yards (8.6 YPC) and one touchdown. He’s added eight receptions on 12 targets for 77 yards and another touchdown.