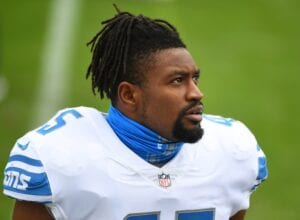 Cabinda, 25, wound up going undrafted out of Penn State back in 2018. He later signed a three-year, $1.71 million contract with the Raiders but was waived coming out of the preseason.

Cabinda was on and off of the Raiders’ practice squad before eventually catching on with the Lions in 2019.

In 2020, Cabinda appeared in all 16 games for the Lions and recorded three tackles.