According to Aaron Wilson, the Lions worked out quarterbacks Joe Callahan and Taryn Christion on Tuesday.

Callahan, 26, wound up signing a three-year, $1.62 million contract with the Packers as an undrafted free agent out of Wesley College back in 2016. He was able to make the 53-man roster coming out of the preseason before eventually being cut loose.

Callahan had brief stints with the Saints and Browns before returning to the Packers during the 2016 season. The Packers re-signed Callahan as an exclusive rights free agent, but he was later waived and signed by the Eagles.

Since then, he’s had brief stints with the Buccaneers and Ravens.

In 2017, Callahan appeared in one game for the Packers and completed 5 of 7 passes for 11 yards and no touchdowns. 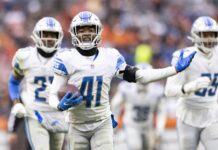