Ian Rapoport reports that former Panthers HC Matt Rhule has agreed to a deal to become the new head coach at the University of Nebraska. 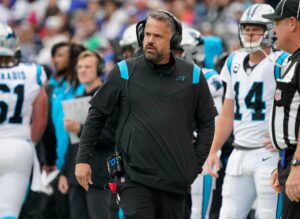 Pete Thamel mentioned that there are still some details to be finalized including the $34 million owed to him by the Panthers.

Rhule has been mentioned as a potential candidate for Nebraska for a while now, so this shouldn’t come as a big surprise.

Rhule did a good job at both Temple and Baylor before landing the Panthers’ job and Nebraska could use someone to stabilize the program after disappointing results from their last few head coaches.

Rhule, 47, began his coaching career at Albright as a linebackers coach in 1998. He worked for a number of schools including Buffalo, Western Carolina, UCLA, and Temple before being hired by the Giants as an assistant offensive line coach for the 2012 season.