Through the first few weeks of training camp, 49ers first-round DT Javon Kinlaw has been his own biggest critic. The massive, 6-6, 310-pound Kinlaw was “used to playing bully ball in college” but admitted he’d “be lying if I thought [his performance] was good” going up against G Laken Tomlinson in practice.

“I’ve probably all my life been the biggest guy. So that’s nothing new,” Kinlaw said via Cam Inman of the San Jose Mercury News. “But honestly, coming in, I thought I’d be like another guy. Then I look around and, dang, I’m the biggest. But just because I’m big, it doesn’t mean anything. Everybody’s strong and big, so it’s all about technique for me now.”

Rams DT Michael Brockers said he was surprised at just how “massive” third-round OLB Terrell Lewis is and initially thought he was a defensive tackle.

“Man, he’s a massive dude,” Brockers said, via Jourdan Rodrigue of The Athletic. “At first, I was like, ‘That’s the guy they got replacing me.’ Then I saw him at outside linebacker and was like, ‘What?’”

“He certainly looks how you’re supposed to,” said McVay. “He’s exactly what you want when you draw up a Madden player, in terms of what that outside edge player looks like. … It’s just been good getting him back into the building, back into the flow.”

Seahawks TE Greg Olsen has no shortage of options when the Panthers cut him this offseason. Multiple teams expressed interest in the veteran tight end and he was also being chased by TV networks for broadcast booth opportunities. But Olsen chose the Seahawks because he thought they offered the best chance for him to rid himself of the sour taste the past few years have left him with.

“I just feel like I still have game left, I thought I still had things to prove — both to myself and I thought I had some work to do to cement myself with my legacy as a player,” he said via Logan Reardon of the team’s official website. “I didn’t like the way my last two years (before last year), 2017 and 2018, went, with being hurt and getting dinged up and not feeling like I was able to be myself. That was kind of a bitter pill to swallow to think that my career would end like that. But when the opportunity came to play out here, it was just a really unique opportunity and a really unique circumstance to come out with a winning franchise and a proven head coach and proven quarterback.” 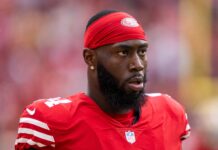