Falcons LB Vic Beasley said he is focused on himself when asked about playing through trade rumors that surfaced at the trade deadline.

“It’s whatever, you know,” Beasley said, via D. Orlando Ledbetter of the Atlanta Journal-Constitution. “I feel like that’s on coach (Dan) Quinn. That’s on a higher power other than me. I just try to control what I can control.”

Vikings Trade For Raiders DT P.J. Hall Falls Through After He Fails Physical 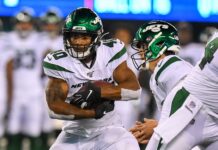 186,706FansLike
7,623FollowersFollow
276,494FollowersFollow
© NFLTradeRumors.co is an independent news source and has no affiliation with the National Football League (NFL), NFL.com, or any team(s).
wpDiscuz