Saints HC Sean Payton said he had an understanding with Drew Brees last offseason that he would retire after the 2020 campaign.

“I knew Brees was going to retire after the season… would had bet a year ago he was strongly considering it. He had time to think about and decided to come back…It was almost understood, he came back and this was his last year,” said Payton, via Dianna Russini.

Payton added that he’s told Taysom Hill and Jameis Winston that they will compete for the starting role for 2021.

“I’ve told both of them the two of you are going to compete for this position, and they understand it,” said Payton, via Luke Johnson. “I think last year was important to us relative to Jameis. … It gave us a year to evaluate him and it also gave him a year to evaluate us.”

Although Payton mentioned that they’ll likely take a “few calls” about quarterbacks,

“I think we are. Look, there will be a few calls we make,” said Payton, via Underhill. “Now there’s a few things that may still be out there, but I see those two competing for this position.”

Latest On Panthers’ Plans For No. 8 Pick 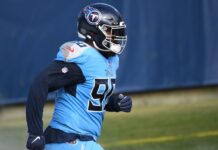