49ers CB Richard Sherman was an integral member of the historic Seahawks’ defense of the past decade, nicknamed “The Legion of Boom.” Now playing out the twilight of his career in San Francisco, Sherman says he sees a lot of similarities between the old Seattle defenses and his current unit.

“I see similarities now, obviously, with all the pass rushers we have now, all the talent we have up front,” Sherman said on NFL Network. “The linebackers are versatile. They can run, they can cover. And then in the backend, we’ve got tall, rangy corners. We’ve got Jason Verrett now, who’s very versatile. (K’Waun Williams) is a great slot, and we’ve got a hitter in the strong safety box. So I think we’re going to be similar. Obviously, it’s the scheme, schematically, it’s similar, but we’ll see. We’ve got to be consistent. We’ve had some really good days out here. You’ve got to stack them, though, as you know.” 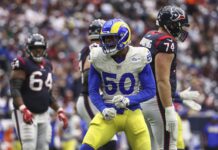