According to Bengals.com, the team has been taking Carson Palmers trade demands “quite seriously,” and “kicking the tires on all kinds of options” in case they are not able to retain for the upcoming season and beyond.

This is the first indication that the team is even considering not having Palmer as their starting quarterback come 2011. Cincinnati is said to be taking a “close look” at some of the quarterback options in the draft. The Bengals have the No. 4 pick so they have a chance to land one of Blaine Gabbert or Cam Newton at that spot. Depending 0n what happens with the draft Ryan Mallett or Jake Locker‘s draft stock, they could be available to Cincinnati in the second round which would allow them address other holes with their first-round pick.

“In my opinion, the Bengals should trade Palmer while they can still get decent value for him,” Walker says. “Cincinnati will be rebuilding for the next two years anyway — with or without Palmer — and there are plenty of teams in need of a good quarterback.”

Without a CBA agreement in place, it will be impossible for the Bengals to move Palmer but if the NFL and the NFLPA can get a deal done before the draft, the market for Palmer will heat up. The most interesting aspect of this scenario will be what teams are willing to part with in return for Palmer. As of now, I wouldn’t expect anyone to offer a first-round pick for him but more surprising things have happened in the NFL so we’ll have to see. 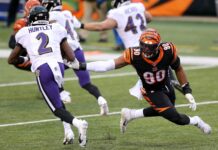