Tim Twentyman of DetroitLions.com writes that S O.J. Atogwe visited with the Lions on Wednesday but wound up leaving without a contract.

Atogwe did mention that he’s “a huge fan of the Lions” and the team could use some additional help in their secondary so there’s a chance that they could discuss some a deal at a later time.

Twnetyman notes that Lions considered signing him back in 2009 but could come close to the Rams offer at the time.

Atogwe is one of the best available options at the safety position which should help his chances of finding a new team in the coming days. 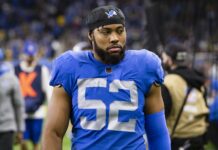