Rob Demovsky of ESPN reports that the Packers are expected to exercise S Darnell Savage‘s fifth-year option for the 2023 season. 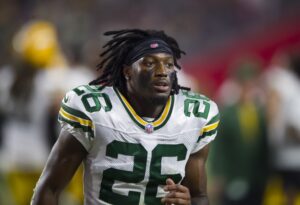 The fifth-year option is expected to cost the Packers around $7,901,000 fully guaranteed for the 2023 season, but won’t prevent them from working on a long-term deal before then.

Savage, 24, is a former first-round pick of the Packers back in 2019. Green Bay elected to trade up with the Seahawks to acquire him and exchanged their No. 30, No. 114 and No. 118 picks for the right to draft him.

In 2021, Savage appeared in all 17 games for the Packers and recorded 63 tackles, two interceptions and nine pass deflections.