According to Tom Pelissero, the Packers and QB Aaron Rodgers haven’t made any decisions on whether Rodgers would sit if/when Green Bay is eliminated from playoff contention. 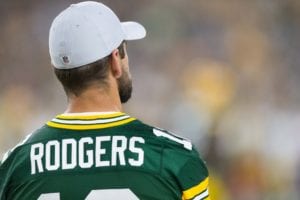 He adds they’ll discuss the scenario as it comes up. Rodgers is a little beaten up right now, as he’s been playing through a broken thumb since Week 5 and picked up a rib injury in Week 12, though Pelissero says Rodgers avoided any breaks or fractures.

The team plays the Bears in Week 13 followed by a bye in Week 14 and Pelissero notes they’ll evaluate things then. Rodgers will have a major voice in the decision and Pelissero adds if he wants to play and physically is able to, there’s a good chance he remains the starter.

While there would be some value to seeing backup QB Jordan Love in more game reps, Pelissero writes the team doesn’t feel like they need it to evaluate him, as he has been progressing in practice behind the scenes.

Rodgers was owed a base salary of $25 million in the final year of his deal in 2022 when he agreed to a three-year, $150 million extension this offseason with $101 million of the deal guaranteed.

We’ll have more on Rodgers as the news is available.