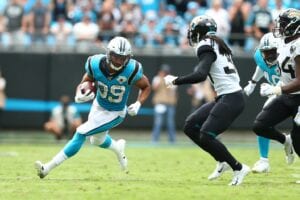 Bonnafon, 24, signed with the Panthers as an undrafted free agent out of Louisville in 2018. He was waived coming out of the preseason and brought back on the practice squad, where he spent the rest of the season.

Bonnafon re-signed with the Panthers on a futures deal for 2019. He ended up making the final roster at the end of the preseason and returned to Carolina on a one-year deal this past February.

In 2020, Bonnafon has appeared in two games for the Panthers and rushed for 69 yards on 12 carries (5.8 YPC) and caught two passes for 18 yards receiving and a touchdown.