Ian Rapoport of NFL Media reports that Panthers QB Teddy Bridgewater is considered day to day after tests revealed that he’s dealing with an MCL sprain in his right knee. 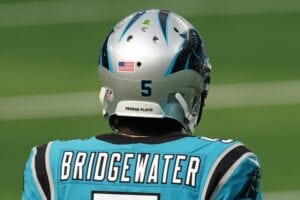 This is obviously good news as far as knee injuries are concerned and there appears to be a shot he’ll be available for Carolina in Week 11.

Bridgewater signed a one-year, $6 million contract with the Jets last year that included just $500,000 guaranteed. However, the Jets later traded him to the Saints during the preseason and he returned to New Orleans last year on another one-year contract.

The Panthers signed Bridgewater to a three-year, $63 million contract this past March.

In 2020, Bridgewater has appeared in 10 games for the Panthers and completed 72.1 percent of his passes for 2,552 yards, 13 touchdowns and seven interceptions. He has also rushed for 196 yards.