Aaron Wilson reports the Carolina Panthers are re-signing QB P.J. Walker on a one-year deal for the 2022 season. 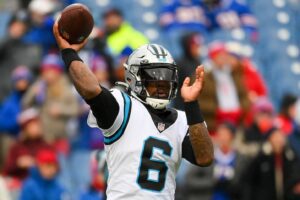 The Panthers have confirmed the news and announced that they’ve also signed FB Giovanni Ricci to one-year extensions and signed eight players to futures contracts for the 2022 season.

Walker would have been an exclusive-rights free agent had he hit the market.

Walker, 26, originally signed with the Colts as an undrafted free agent out of Temple in 2017. He spent two years on Indianapolis’ practice squad before being waived prior to the 2019 season.

Walker played for the Houston Roughnecks of the XFL in the spring of 2020. Carolina then signed him to a two-year deal following the XFL’s dissolution.

In 2021, Walker played in five games for Carolina, completing 54.5% of his passes for 362 yards, one touchdown and three interceptions.