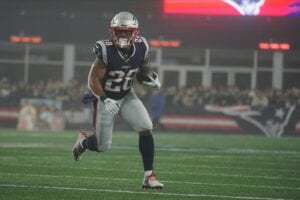 White’s 2021 season is over after he suffered a serious hip injury last week.

Yates notes that the Patriots could use his roster spot to activate WR N’Keal Harry from injured reserve.

White, 29, is a former fourth-round pick out of Wisconsin by the Patriots in the 2014 NFL Draft. He was entering the final year of his four-year, $2,617,088 rookie contract when he agreed to a three-year, $12 million extension with the Patriots back in 2017.

White made a base salary of $3 million in 2020 before agreeing on a one-year, $2.5 million deal with the Patriots in 2021 that is fully guaranteed.

In 2021, White has appeared in three games for the Patriots and rushed nine times for 32 yards and a touchdown. He has also caught 12 passes for 94 yards.