New England now has all but two draft picks — Dominique Easley and Jimmy Garoppolo — under contract.

The Patriots were clearly looking to bolster their interior offensive line depth in draft. Both Stork and Halapio have plenty of college experience and should be able to increase the level of competition in the coming months.

At Georgia Tech, Thomas totaled 234 tackles 13.5 for a loss, five sacks, nine interceptions and three forced fumbles over the course his college career.

“He played in a number of different spots — in the kicking game, a little safety, a little nickel, some corner. It looks like he’s got the ability to compete at all those spots,” HC Bill Belichick said of Thomas, via ESPN Boston. “Versatile guy, smart guy. Really a four-down type player. He’s an interesting guy.” 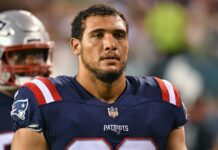