According to Adam Schefter, the Raiders have a workout scheduled with veteran NFL QB Colin Kaepernick. 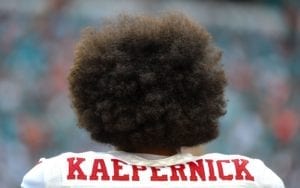 Kaepernick has not played since 2016 since being blackballed for his protest of racism and police brutality during the national anthem.

There’s been a renewed effort on his camp’s part to try and return to the league this summer, as he’s had workouts with a number of players and at halftime of Michigan’s spring game.

Raiders owner Mark Davis has publicly supported Kaepernick in the past and said he would be on board if his football decision-makers wanted to bring him in.

While Raiders QB Derek Carr is entrenched as the starter, Kaepernick could be an upgrade as a backup quarterback. It might be too early to talk about any potential signing.

Kaepernick, 34, is a former second-round pick of the 49ers back in 2010. He was in the third year of his seven-year, $126.97 million contract that included $61 million guaranteed when reached an agreement with the 49ers on a restructured deal that allowed him to become an unrestricted free agent in 2016.

The Seahawks showed interest in bringing Kaepernick in for a visit before later canceling the meeting altogether. The NFL set up a private workout for him in 2019 but it didn’t result in a signing.

Kaepernick last appeared in an NFL game back in 2016 when he completed 59.2 percent of his passes for 2,241 yards and 16 touchdowns and four interceptions while adding 468 yards rushing and two touchdowns.

We’ll have more regarding Kaepernick as the news is available.