The Las Vegas Raiders have promoted OL Jaryd Jones-Smith to their active roster on Sunday, according to Paul Gutierrez. 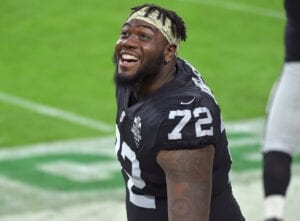 Jones-Smith will revert back to the team’s practice squad on Monday without having to clear waivers.

Jones-Smith, 25, wound up going undrafted out of Pittsburgh back in 2018. He later signed a rookie contract with the Texans, but was waived coming out of the preseason.

From there, Jones-Smith had brief stints with the Dolphins and 49ers. After being waived at the start of the regular season this past September, he signed on to the Raiders’ practice squad and has been on and off of their roster.

In 2020, Jones-Smith has been active for two games.