Jeremy Fowler of ESPN reports that the Raiders are signing veteran WR David Moore to their practice squad. 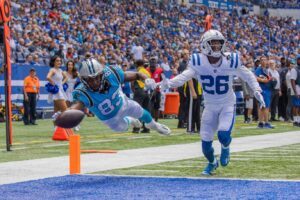 Moore, 26, is a former seventh-round pick out of East Central by the Seahawks in 2017. He signed a four-year, $2.48 million rookie contract but was waived as they trimmed their roster down to the 53-man limit but signed him to their practice squad once he cleared waivers.

Moore was promoted to their active roster later in 2017 and returned to Seattle on a one-year deal as an exclusive rights free agent in 2019 and also agreed to a pay cut last offseason for 2020.

He was testing the market as an unrestricted free agent when he signed a two-year, $4.75 million deal with the Panthers. Carolina later released Moore prior to the 2021 NFL season.