According to ARLnow.com, Ravens DL Broderick Washington was arrested in Arlington, Texas over the weekend. 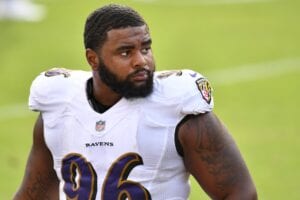 Washington allegedly damaged five vehicles with a metal object at an apartment complex and is accused of damaging an apartment door and window.

Police were dispatched to multiple reports of a male suspect breaking into vehicles with a metal object, according to the criminal report. Officers reportedly located Washington and arrested him without incident.

Washington was released on bail and has a court hearing for Wednesday, March 31.

The Ravens issued the following statement regarding Washington:

“We are aware of the matter involving Broderick Washington. We have spoken with Broderick about this matter and will continue to monitor the situation.”