Jamison Hensley reports that there are now “no expectations” that the Ravens will sign OT Alejandro Villanueva, despite his earlier report.

Hensley says that it’s possible a deal gets done, but the Ravens are considering all options to replace Orlando Brown, including the draft.

Hensley reported earlier that the Ravens were expected to replace Brown with Villanueva likely after the draft.

Josina Anderson reports that her understanding is that there’s optimism that the Ravens and free agent OT Alejandro Villanueva can get a deal, pending an agreement on terms. 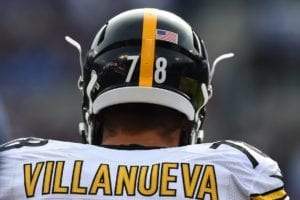 Anderson explains that Villanueva is viewed by the Ravens as being able to play right tackle with the flexibility to swing inside if need be or play left tackle depending on Ronnie Stanley‘s health.