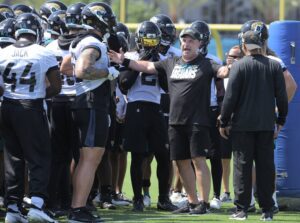 Recent reports have said that Baltimore is targeting Michigan DC Mike Macdonald for their vacancy. However, it appears as though they’re still in the process of interviewing candidates.

The Ravens are looking to fill the role after letting DC Don Martindale go last week.

Cullen, 54, began his coaching career at UMass as their RBs coach in 1990. He later worked for several schools before working his way up to defensive coordinator.

The Jaguars hired Cullen to be their defensive coordinator last season.