According to Adam Schefter, the Ravens and RB Gus Edwards have agreed to terms on a two-year extension. 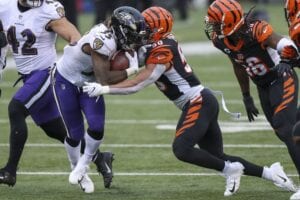 The deal is worth $10 million total and locks Edwards up through the 2023 season.

Edwards had re-signed as a restricted free agent this offseason on the second-round tender and will make $3.384 million in 2021.

Edwards, 25, wound up signing on with the Ravens as an undrafted free agent out of Rutgers back in 2018. He agreed to a three-year, $1.71 million contract with the Ravens, but was unfortunately waived coming out of the preseason.

The Ravens signed Edwards to their practice squad after he cleared waivers and was promoted in October of 2018, eventually starting for the Ravens by the end of the season.

Baltimore also re-signed him as an exclusive rights free-agent in 2019.

In 2020, Edwards appeared in all 16 games for the Ravens and rushed for 723 yards on 144 carries (5 YPC) to go along with nine receptions for 129 yards receiving and six total touchdowns.