The Baltimore Ravens announced Monday that WR De’Anthony Thomas has voluntarily opted-out of the 2020 season and has been placed on the reserve list. 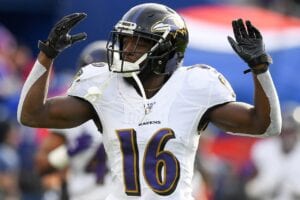 Thomas, 27, was taken in the fourth round of the 2014 NFL Draft by the Chiefs. The Chiefs re-signed Thomas to a one-year contract last year but his season ended abruptly after being placed on injured reserve with a fractured leg.

Kansas City re-signed him in August but elected to cut him loose during the season. He was later signed by the Ravens. Baltimore re-signed Thomas back in March.

In 2019, Thomas appeared in 14 games for the Ravens and Chiefs and caught one pass for six yards to go along with five rushing yards. He also totaled 321 kick return yards and 148 punt return yards on special teams.