Charles Robinson of Yahoo Sports reports Saints HC Sean Payton and WR Michael Thomas had a productive meeting to work through their frustration. 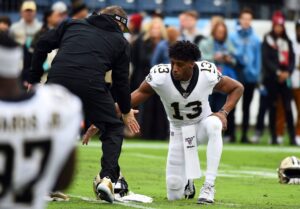 Robinson’s report says the sides talked about Payton’s issues about when Thomas had ankle surgery in the offseason and Thomas’ social media subtweet.

“They had a good talk about [the issues],” a source tells Robinson. “I think they both believe it’s not anything that has to go any further than what is already out there. There was some frustration from both viewpoints and that was the point of the meeting.”

Sources told Robinson that both Payton and Thomas don’t think their issues need to last any longer and they just needed to talk things out.

“It would make more sense to just ride it out, at least until he’s back on the field,” one general manager tells Robinson. “If it’s not going to work after that, at least you know [as a potential trade suitor] what he can do on the field. It takes some of the risk out of an evaluation.”