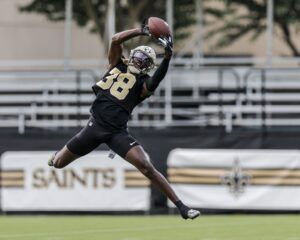 Monday has been an early standout in training camp and not just for his name.

If New Orleans’ worries prove correct, expect the team to place Monday on injured reserve in the coming days.

Monday, 22, signed with the Saints as an undrafted free agent out of Auburn following the 2022 NFL Draft.