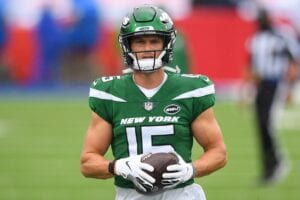 According to Garafolo, the Saints planned on bringing both players back after initially cutting them last week.

Hogan, 32, signed with the 49ers as an undrafted free agent out of Monmouth back in 2011. He had brief stints with the Giants and Dolphins before signing with the Bills during the 2012 season.

Buffalo brought Hogan back on exclusive rights deals for the next two seasons before the Patriots signed him away as a restricted free agent in 2016. In 2019, Hogan agreed to a one-year deal with the Panthers.

Hogan signed with the Jets back in August of last year but he was later released from injured reserve. He’s currently playing in the Premiere Lacrosse League.

For his career, Hogan has appeared in 110 games for the Bills, Patriots, Panthers and Jets and caught 216 passes for 2,795 yards receiving and 18 touchdowns.

He was later brought in by the Titans in 2020 to compete for the backup quarterback job but was eventually waived and added to the team’s practice squad.

The Saints later signed Siemian to their active roster and practice squad last year before he re-signed to a one-year deal this offseason.