The Seattle Seahawks have released OL Chance Warmack, who opted out of the 2020 season, on Monday, according to Field Yates. 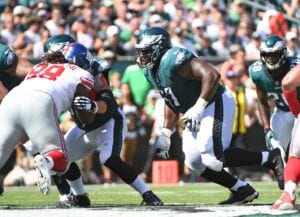 Warmack, 29, was taken with the No. 10 overall pick by the Titans back in 2013. Tennesee placed him on their injured reserve due to a torn tendon in his finger and declined to pick up his fifth-year option that would have run them $11.9 million in 2017.

The Eagles signed Warmack to a one-year deal for the 2017 season and later agreed to a one-year extension worth up to $5 million. Warmack wound up sitting out the entire 2019 season.

Warmack signed a one-year contract with the Seahawks last year.

For his career, Warmack has appeared in 68 games for the Titans and Eagles, making 51 starts.