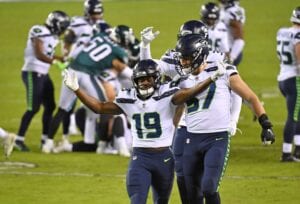 Hart, 24, wound up going undrafted out of Georgia State back in 2019. He later agreed to a three-year, $1.755 million contract with the Colts.

Indianapolis waived Hart with an injury designation coming out of the preseason and he later reverted to their injured reserve list. From there, the Colts cut him with an injury settlement at the start of the regular season.

The Seahawks eventually signed Hart to their practice squad and brought him back on a futures contract. He’s been on and off of their roster this year.

In 2020, Hart has appeared in 11 games for the Seahawks and caught one pass for three yards. He also rushed for 19 yards on one carry.