Terry, 23, wound up going undrafted out of Florida State back in April. He later agreed to a rookie contract with the Seahawks.

At Florida State, Terry was named second-team All-ACC in 2019 and opted out of the final two games of the 2020 season. 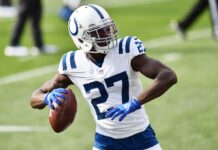