According to Jason La Canfora, the Pittsburgh Steelers have done extensive work on the 2022 class of draft-eligible quarterbacks and league sources think they could be aggressive in the draft to land one. 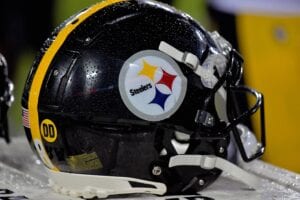 Even if QB Ben Roethlisberger were not in his final season starting with the team — and indications seem to be that is the case — La Canfora notes Pittsburgh would still need a long-term option at quarterback.

La Canfora says Steelers QB Mason Rudolph has shown he’s not a viable option to build around long-term, which adds a little extra pressure to correctly evaluate the 2022 class.

While the broad perception around 2022 is that it’s a down year at the position, there still could be as many as five who end up going in the first round just like in 2020.

The Steelers have done extensive work on Howell and GM Kevin Colbert has evaluated him in person on multiple occasions. They obviously have a lot of familiarity with Pickett as well given that Pitt shares a facility with the Steelers.

La Canfora notes Strong also has some big fans in the scouting community but there are concerns about his medical grade since he’s battled knee injuries in the past.

For more on the 2022 quarterback class, check out our Thanksgiving issue of NFLTR Review.