Gerry Dulac reports that Steelers GM Kevin Colbert will be stepping down following the draft when his contract expires. This move was expected as Colbert has taken one-year deals while thinking things over the past few seasons. 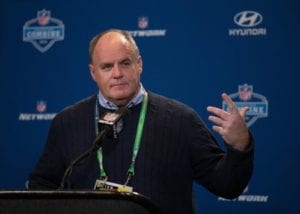 There are two strong internal candidates to replace Colbert in Pittsburgh —  VP of football and business administration Omar Khan and pro scouting coordinator Brandon Hunt. Pelissero and Rapoport add Colbert could stay on in an advisory role to help the transition.

Earlier this year, Aditi Kinkhabwala noted Colbert has told other people he planned to retire when QB Ben Roethlisberger did.

Colbert, 65, has spent the past 21 seasons as the team’s general manager and led them to a record of 225-124-3 (64.4 percent), which includes 13 playoff appearances, three trips to the Super Bowl, and two championships.

We will have more news on the Steelers GM search as it becomes available.