Tom Pelissero reports that the Pittsburgh Steelers are hosting general manager candidate Doug Whaley for a second interview this week. 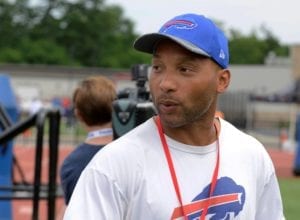 Whaley, 49, was hired as the Bills’ general manager back in 2013 after he spent 10 years working for the Steelers. The Bills elected to fire Whaley leading up to this year’s NFL draft.

During his stint as Bills’ GM, Whaley’s teams produced a record of 30-33 (47.6 percent) and have just one winning season and no playoff appearances over the course of four years.

He has since worked with the XFL and is currently their senior vice president of player personnel.

We will have more news on Whaley and the Steelers GM search as it becomes available.