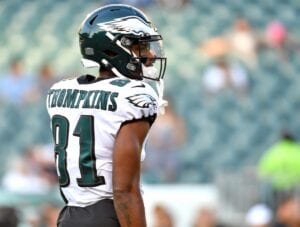 Thompkins recently worked out for the Steelers.

Thompkins, 24, wound up going undrafted out of Penn State last year. He later signed a three-year, $1.755 million contract with the Eagles.

However, Philadelphia opted to waive Thompkins coming out of the preseason and he sat out the 2019 season. He did join the XFL’s DC Defenders and appeared in five games, catching seven passes for 85 yards and one touchdown.

During his college career at Penn State, Thompkins totaled 83 receptions for 1,245 yards receiving and six touchdowns while rushing for 12 yards on five carries and a touchdown over the course of four seasons and 45 games. He also contributed 675 punt return yards and two touchdowns.