Steelers HC Mike Tomlin was asked about the reports that TE Ladarius Green is on the active/PUP list because of lingering headaches.

“He’s on PUP because of his ankle,” Tomlin said, via Mark Kaboly. “We stated that. He’s rehabbing nice. He’s gotten better in that area, but he’s not ready to go. I’m not going to respond to reports from unnamed sources.”

Ed Bouchette and Gerry Dulac of the Pittsburgh Post-Gazette confirms reports that Steelers TE Ladarius Green remains on the active/PUP list because of headaches and not the ankle surgery he had during the offseason.

According to the report, Green is currently in the NFL’s concussion protocol. However, a source tells the Post-Gazette that Green never told the Steelers about having issues with headaches at the time the team signed him to a four-year, $20 million contract back in March.

Mike Florio of Pro Football Talk mentions that he spoke to a person who said that Steelers TE Ladarius Green is considering retirement, due to the lingering headaches he’s experiencing. Florio says that if the headaches persist, retirement remains a possibility for Green.

Although, a second source told Florio today that there’s now some speculation as to whether or not the Steelers may eventually released Green.

Should Pittsburgh release Green, they could attempt to recover his $4.75 million signing bonus. If Green retires, he would owe the team this money.

Aditi Kinkhabwala of NFL Media reports that Steelers TE Ladarius Green hasn’t practiced because of headaches he’s been experiencing, and not because of his surgically repaired ankle.

Green’s agent, Adisi Bakara, told Kinkhabwala Wednesday night that “his ankle is fine.” However, Bakara wouldn’t comment on what is specifically keeping Green from practicing for the Steelers.

Although, Green has been running sprints at St. Vincent’s College, while his teammates practice.

This is a situation worth monitoring, considering that Green sustained two concussions in just two weeks last year while playing for the Chargers. In fact, Green had a total of three concussions over the span of a calendar year.

Regarding Green’s status, Steelers HC Mike Tomlin said he’s been “touch-and-go up to this point.”

“He’s progressing, but we really thought it would be touch-and-go up to this point,” Tomlin said. “The (ankle) surgery was not a routine cleanup, so we knew it would be a significant amount of time.”

Green, 26, is a former fourth-round pick of the Chargers back in 2012. He played out his rookie deal for the Chargers before signing a four-year, $20 million contract that included a $4.75 million signing bonus with the Steelers.

In 2015, Green appeared in 13 games for the Chargers and recorded 37 receptions for 429 yards receiving and four touchdowns. 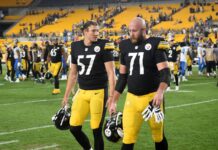